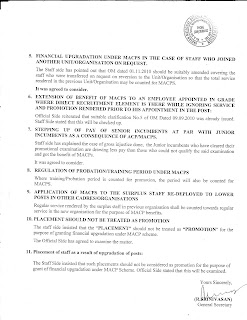 After the implementation of the VIth CPC by the Govt. of India, there is a growing demand from staff side to review the Cadre of Store Keeping Staff in the Ordnance Factories Organisation. 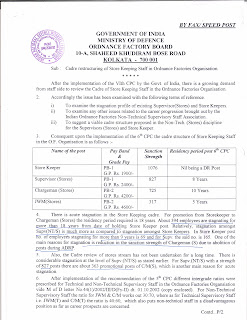 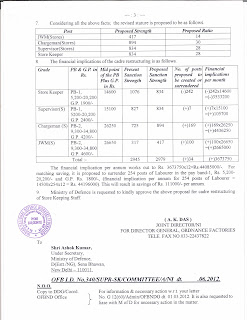 No.12012/2/2009-Estt.(Leave)
Government of India
Ministry of P.G. and Pensions
(Department of Personnel and Training)

The undersigned is directed to refer to this Department OM of even number dated 20.10.2011 on the above subject and to state that it has been decided to extend the benefit of Child Care Leave to civilian female industrial employees working in Defence Establishments w.e.f. 01.09.2008 at par with the non industrial Central Government employees covered by the CCS (Leave) Rules, 1972. Earned Leave, if any availed by these employees between 01.09.2008 and 20.10.2011 specifically for the purpose of taking care of the needs of their eldest two minor children may be converted into Child Care Leave.

2. All conditions specified in Rule 43-C of the CCS (Leave) Rules, 1972 including the number of days and number of spells have to be fulfilled for conversion of Earned Leave into Child Care Leave.

F.No.14014/2/2009-Estt.(D)
Government of India
Ministry of Personnel, Public Grievances and Pensions
(Department of Personnel & Training)
North block,
New Delhi
Dated the 3rd April, 2012
OFFICE MEMORANDUM
Subject : Compassionate appointment - Clarification regarding regulation of conditions and admissibility of various allowances after implementation of Sixth CPC recommendation - regarding.
The undersigned is directed to refer to this Department's O.M. of even number dated 11.12.2009 on the subject mentioned above and to state that large number of references have been received from various Ministries/Departments regarding regulation of various conditions on compassionate appointment and admissibility of different allowances allowed to person appointed on compassionate grounds. Doubts raised by various authorities have been processed in consultation with Department of Expenditure (I.D. No. 22/02/2009-IC-II dated 27th February, 2012) and are  clarified as under :
2. In case of appointment of a widow not fulfilling the requirement of educational qualification, against the post of MULTI TASKING STAFF, she will be placed in Group 'C' - Pay Band - 1 (Rs.5200-20200) + Grade Pay Rs.1800/- directly without insisting on fulfilment of educational qualification norms, provided the appointing authority is satisfied that the duties of the post against which she is being appointed can be performed with help of some on job training. This dispensation is to be allowed for appointment on compassionate ground against the post of MULTI TASKING STAFF only.
sd/-
(Virender Singh)
Under Secretary to the Government of India
Posted by INDWF at 3:23 PM No comments:

Central Civil Services (Revised Pay) Rules, 2008 — Date of next increment in the revised pay structure under Rule 10 of the CCS(RP) Rules, 2008

INTUC/INDWF
INDIAN NATIONAL DEDFENCE WORKERS FEDERATION
JCM III level meeting of OFBoard Council (11th term 11th ordinary meeting) held on 01-03-2012 and 02-03-2012 held at OFB Head Quarters on 01-3-2012, preliniminary meeting was chaired by Member/Personnel and on 02-3-2012 the main meeting was chaired by DGOF/Chairman, OF Board.
Important decision taken, and implemented by OF Board are as follows,
1. For the newly directly recruited IES have been sent for one month induction training to be conducted by factory training schools.  The scheme has been started.
2. To develop skills for the locals and to impart training skill development training program was inaugurated at NADP, Ambajhari on 13-02-2012 by Rajya Raksha Mantri.
3. For recruitment of all Group ’C’ posts (IES/NIES) a Central Recruitment Board for Ordnance Fys has been established having office at Ordnance Factory Estate, Ambajhari which will conduct recruitment process from  01-04-2012 centrally.
4. 2172 posts for IEs have been released by OFB for all Ord. Fys, 388 Labourer-SSK post are released for A&E Group of Fys. Labourer posts for other Divisions will also be considered based on their functional requirements and after receiving the proposals.
5. MACP for JWMs promoted prior to 31.12.2005 to the grade pay of Rs.5400/- has been cleared on 02.03.2012.
6. Granting of 30 days EL and Departmental Overtime (DOT) for piece workers will be settled by Chairman/OFB in consultation with Defence Finance and Ministry of Labour and Employment at the earliest.
7. Boiler Attendants in SSK grade will be promoted to skilled grade without Boiler certificate.
8. Rs.12391 crores out put for the year 2011-12 is likely be achieved which is around 40% increase.
9. During the 5 year plan, which is coming to an end supply was made by Ord. Fys. Rs.46000 crores to Army. Now the demand from M of D during the 12th 5 years plan is around Rs.92000 crores which is almost double which has to be met by Ord. Fys.
10. Roll on indent was granted for 5 years by the Ministry to OFB in all the products. No restrictions for buying new plants, modernization of Fys, manpower and financial grants etc.
11. To increase the capacity of Ord. Fys, 3 sick PSUs with all its infrastructure is likely to be taken over by Ord. Fys Board. These plants are in Naini, Hydrabad and West Bengal.
12. Regarding conducting of LDCE examination for the employees to appoint against 25% Quota, due to pending finalisation of the courses / certificates issued by certain institutions, pending finalization, the Exam dates are likely to be postponed to April 2012.
13. Direct – Indirect Ratio of IEs will be reviewed in order to strengthen the maintenance and Quality Control activities is Ord. Fys.  Necessary directives will be given to Fys to induct manpower in there areas also.
14. Pay slips which are newly designed by PC of Fys will be given in the month of May for the salary of April month mentioning all the details of payments and Recoveries.
15. Co-Relation of piece work on 6th CPC. The report of the sub-committee was sent to three federations. After receiving their views, OFB will discuss with federations and a consensus proposal will be sent to M of Defence for obtaining final orders.
16. Issues Related to 4 grade structure implementation.
Many factories have not yet completed the process of implementation of 4 grade structure. It was demanded that a time bound action from OFB should be fixed and the same should be monitored for expediting the same. Further, PC of Fys should allow the option to choose the Revised pay after 1.1.2006 on the date of promotion to next higher grade. Exemption of Trade test to fill the resultant vacancies be given, so that back date effect can be given for the promotion granted at a later date. It was agreed by OF Board to monitor the progress of implementation and clarifications required will be completed by April 2012.
17. It was demanded that all the employees appointed in USK grade (Labourer, Erstwhile Group D) all have been up graded to SSK grade Rs.1800/- GP w.e.f 1.1.2006 and therefore their earlier ACPs granted should be ignored and they should be granted ACP on completion of 12/24 years up to 31.08.2008 and after 01.09.2008, if completed 30 years they should be granted III MACP.
18. All MCMs placed before 31.12.2011 were granted upgraded to Rs.4200/- GP. Therefore this is not to be counted ACP and only got one ACP.  They should be granted IInd and III ACP ie Rs.4600/- and Rs.4800/-.Since they hot only one ACP to Rs.4000-6000.
19. Uniforms though were approved by the federations with OFB it was demanded that Dress Material as per specifications should be procured centrally and Fys should be given responsibilities to stitch and distribute the dresses at the earliest.
20. A sub-committee was appointed by OFB for rationalization of industrial trades under, the Chairmanship of Shri.B.Pugazendi, GM, HAPP, First meeting held on 01.03.2012. The committee will further decide certain trades to be merged and abolish and also proposing to keep the trades in discipline wise so that parity in promotion between each trade can be maintained.
Posted by INDWF at 4:35 PM No comments: