Framing of Recruitment Rules for the post of Master Craftsman (MCM) and Chargeman both in the same GP of Rs.4200/-

To
DGOF & Chairman
Ordnance Factory Board,
Ayudh Bhawan,
10A, S.K.Bose Road,
Kolkatta 700 001.
Kind Attention to Director/IR
Sub: Restructuring of Cadre of Artisan Staff in Defence Establishments in
modification of recommendation of 6th CPC- framing of Recruitment
Rules for the post of Master Craftsman (MCM) and Chargeman both in
the same GP of Rs.4200/-
Ref: (i) MOD ID No.11 (5)/2009-D (Civ-I) Dated 23rd January, 2014.
(ii) OFB Letter No.NGO/Cadre Review/A/GB/10 Dated 03.03.2014
Sir,
We are in receipt of the copy of OFB letter cited under reference (ii) above alongwith M of D letter dt 23.01.2014 regarding framing of Recruitment Rules for the post of Master Craftsman (MCM) and Chargeman both in the same Grade Pay of Rs.4200/-.
Since Defence Finance and DOP&T have not agreed to grant 3rd MACP to MCM on completion of 30 years of regular service on the reasons that the feeder grade and promotion grade stands remain in the identical Grade Pay.  Further, it was also not agreed to grant one increment on their re-designation from MCM to Chargeman (T).  Based on this refusal, DOP&T suggested to M of D to create separate channel for promotion to MCM and Chargeman (T) and accordingly a model proposal was suggested by M of D and circulated to all Directorates and Federations asking views and comments for further action.
While forwarding the model proposal by OFB vide your letter Dt 03.03.2014 to all Ordnance Factories, you have mentioned in para (3) giving your views about the changes and its functional implications and impacts on the career prospects of other categories.
Giving your proposals and impacts on the changes on model proposal it appears that OFB is having prejudice on the matter which shows that OFB itself is not interested in agreeing to the views of M o D.
We therefore, are totally oppose to the comments of OFB mentioned in your letter, whereas INDWF is firmly support to the proposed model of M of D which will be benefited to the organisation as well as to the individuals.
a)    MCM till they become JWM will continue to work as workman by which we shall be getting their services of workmen (MCM) to work.
b)    Chargeman (T) all will be with the background of having Diploma both through DR & LDCE.
c)    The prospects of promotion of Chargeman will not affect at any cost to others.
d)    The MCM can become only after 25 to 30 years of service only at the end of their long service.
Therefore, the model proposal may please be accepted and a favourable decision may please be forwarded to M of D so that MCM can be considered for 3rd MACP.
Yours Sincerely,
(R.SRINIVASAN)
General Secretary.
Posted by INDWF at 8:20 AM No comments: 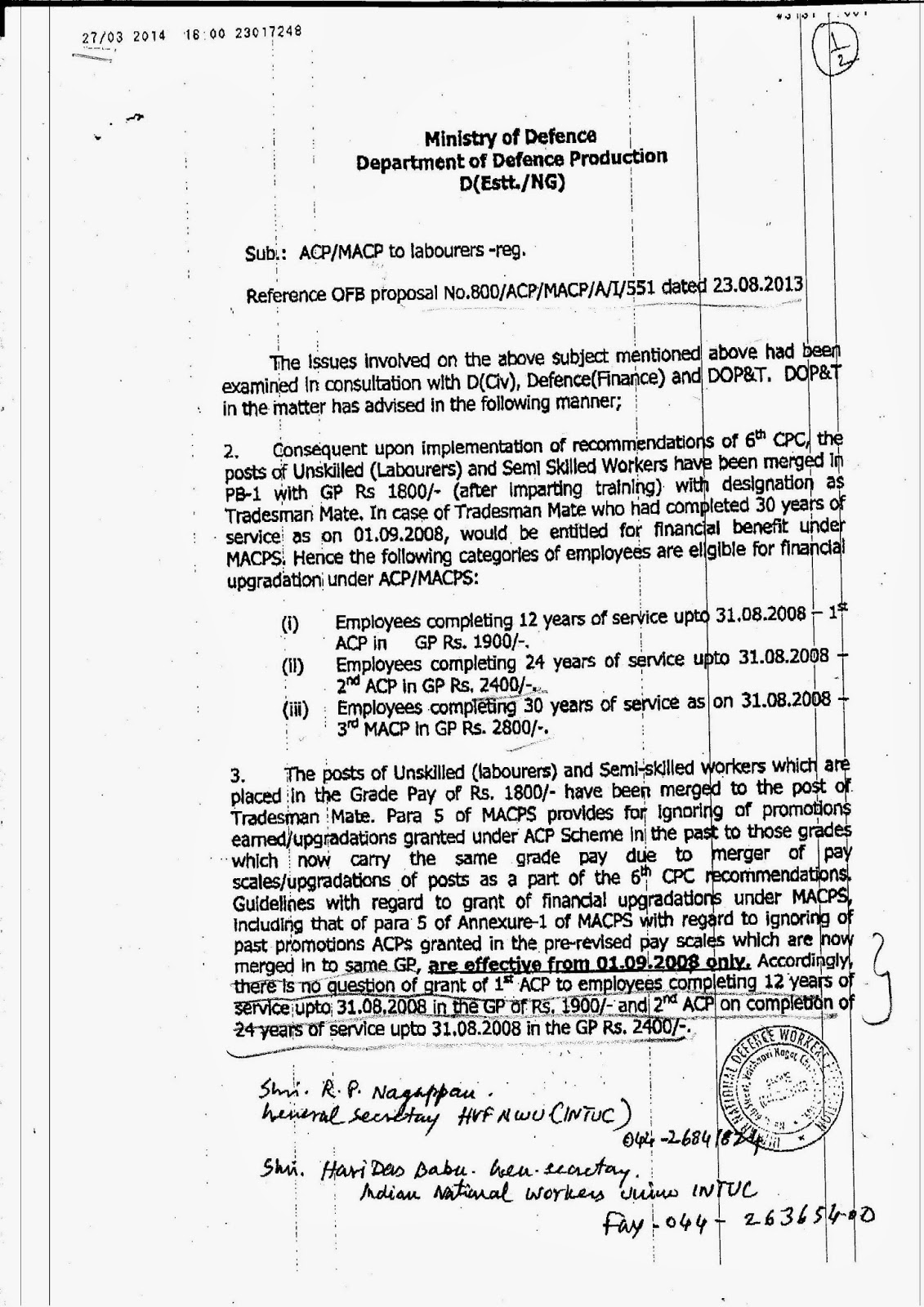 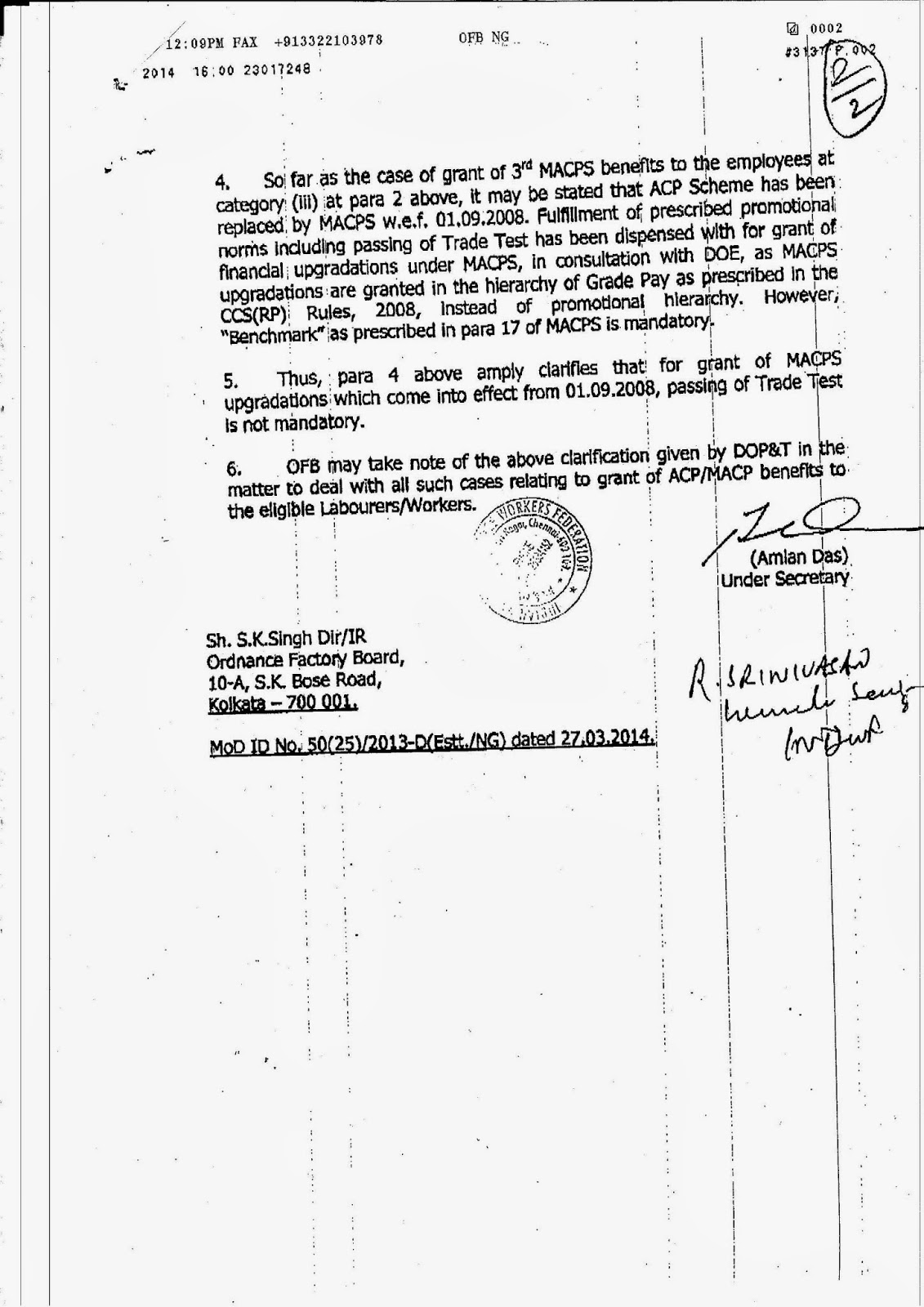 Appointment of Ex-Trade Apprentices of ORdnance Factories in OFs

To
DGOF & Chairman
Ordnance Factory Board,
Ayudh Bhawan,
10A, S.K.Bose Road,
Kolkatta 700 001.
Kind Attention to Director/IR
Sub: Forwarding the copy of the judgement order dt 29.01.2009 by
Hon’ble Supreme Court of India in SLP (Civil) ND(S) 10815-10816 of
2013.
Sir,
I am enclosing the copy of the judgement passed by Hon’ble Supreme Court of India Civil Appeal nos 10815-10816 of 2013 against the WP No.9639/2007 of BHEL               Ex-Apprentices Assn, Trichy.
Originally a unit of BHEL at Ranipet, near Chennai appointed Ex-Trade Apprentices on completion of their successful training whereas BHEL management at Trichy did not consider the Ex-Trade Apprentices for providing employment on completion of their training.  Against this the BHEL Ex-Trade Apprentices Association, Trichy filed WP Hon’ble High Court of Madras and got the judgement in their favour.
Against Hon’ble High Court of Madras judgement, Management BHEL filed SLP and the decision of the Special leave is enclosed for your information and we would like you to consider the same to take benefit to appoint the ex-trade Apprentices of Ordnance Factories.
Yours Sincerely,


General Secretary
Posted by INDWF at 7:35 AM No comments: 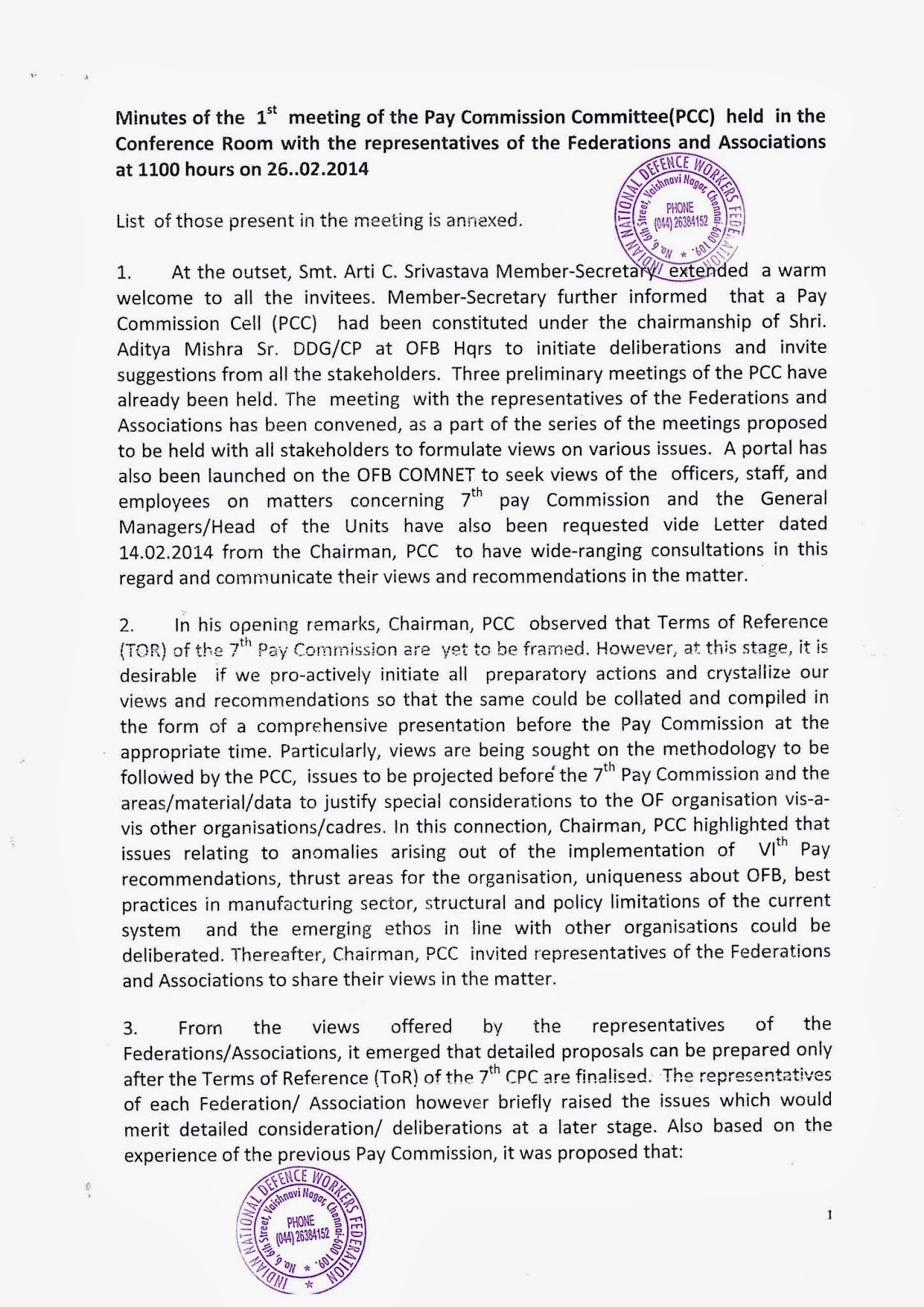 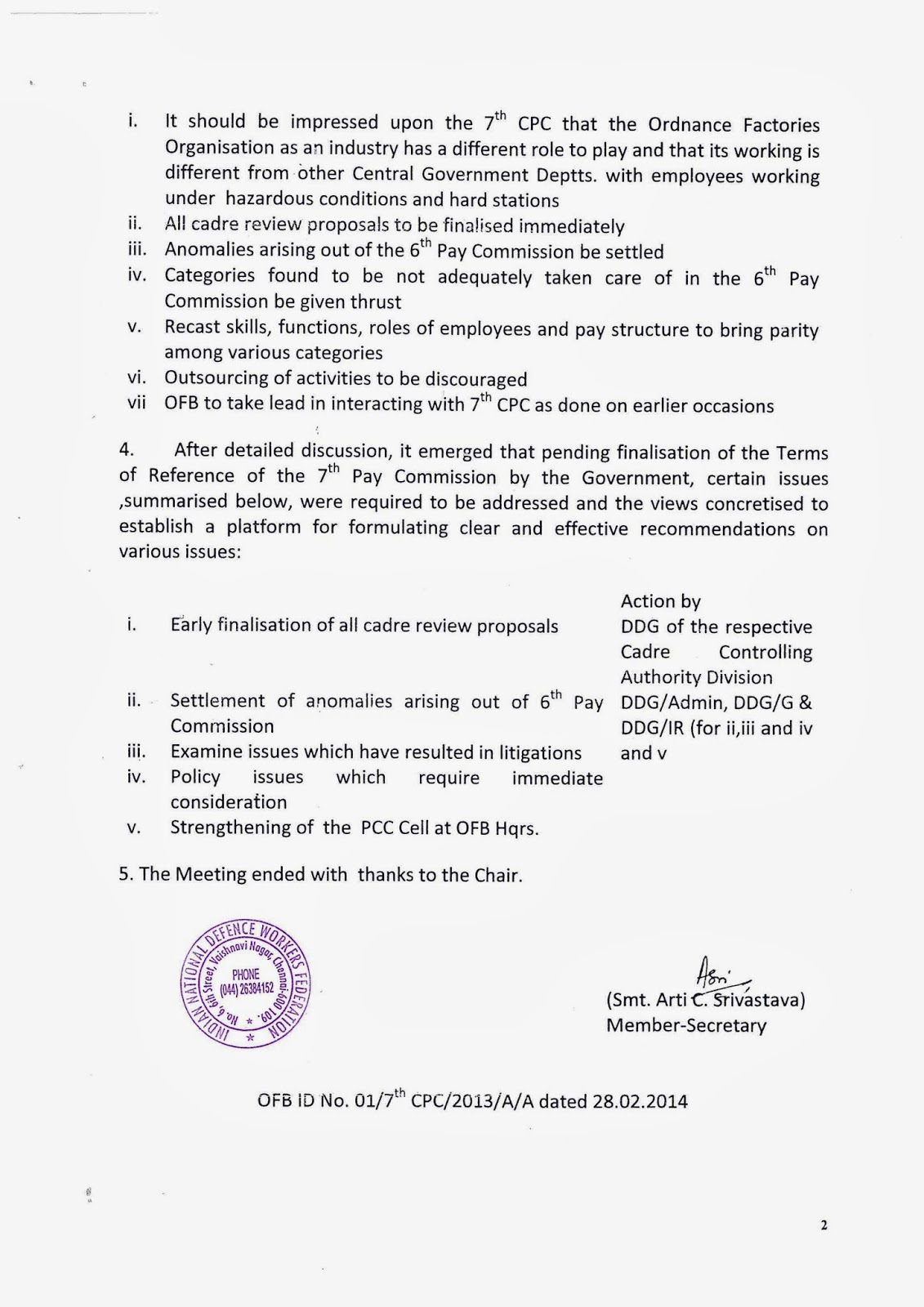 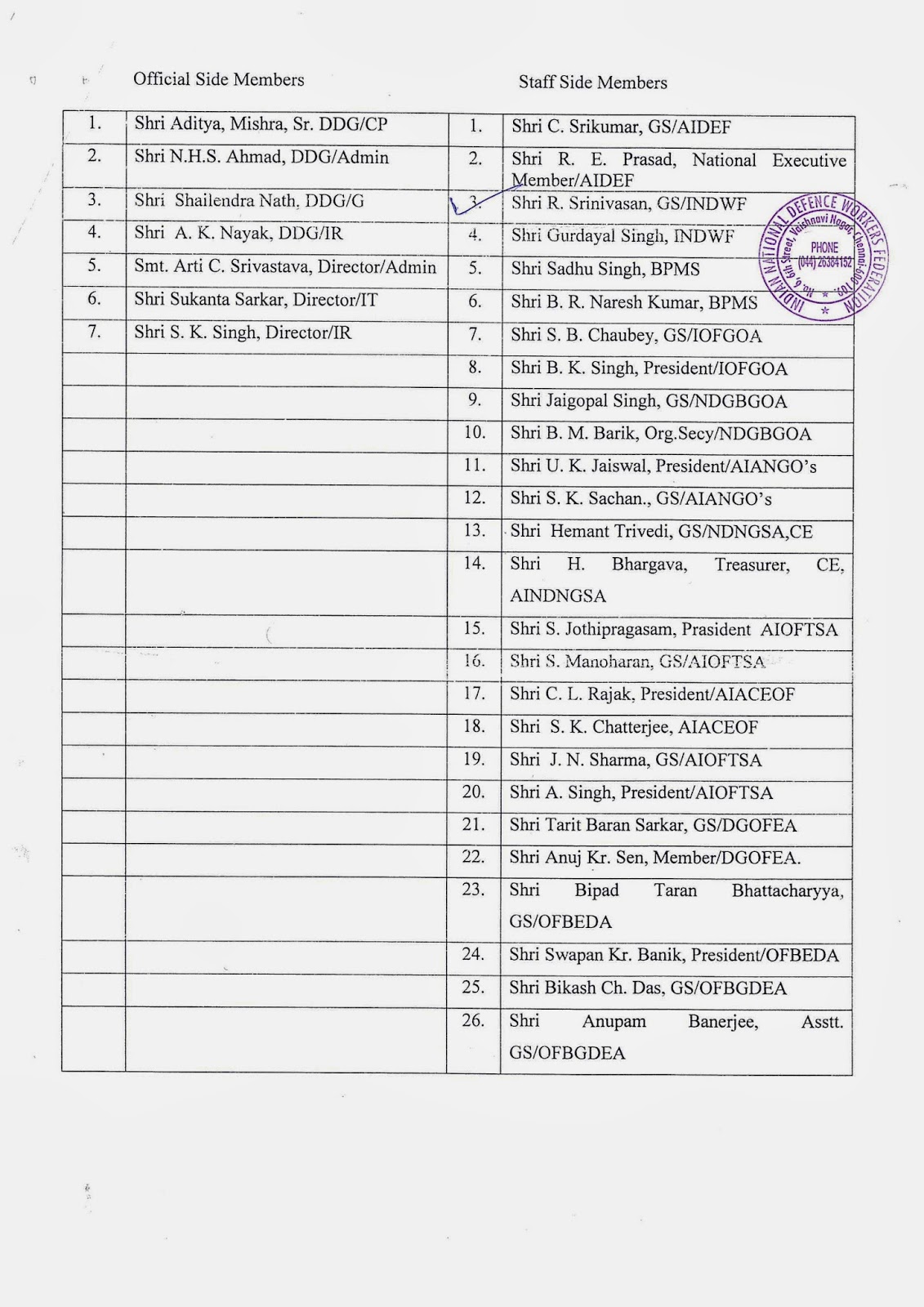 ONE TIME RELAXATION OF QUALIFYING SERVICE FOR OS IN ORDNANCE FACTORIES 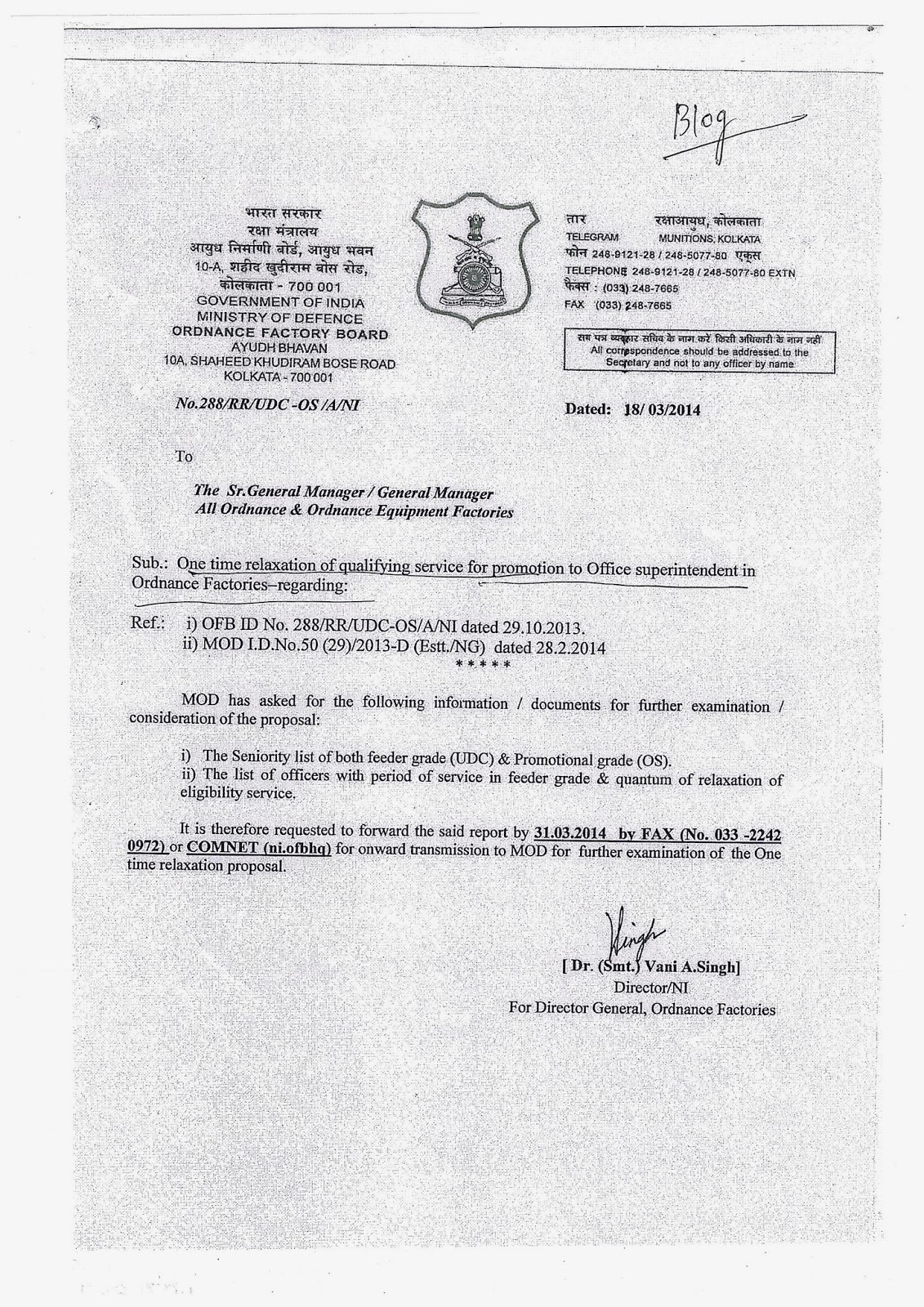 CONDUCT OF DPCS TO CHARGEMAN IN NAVY 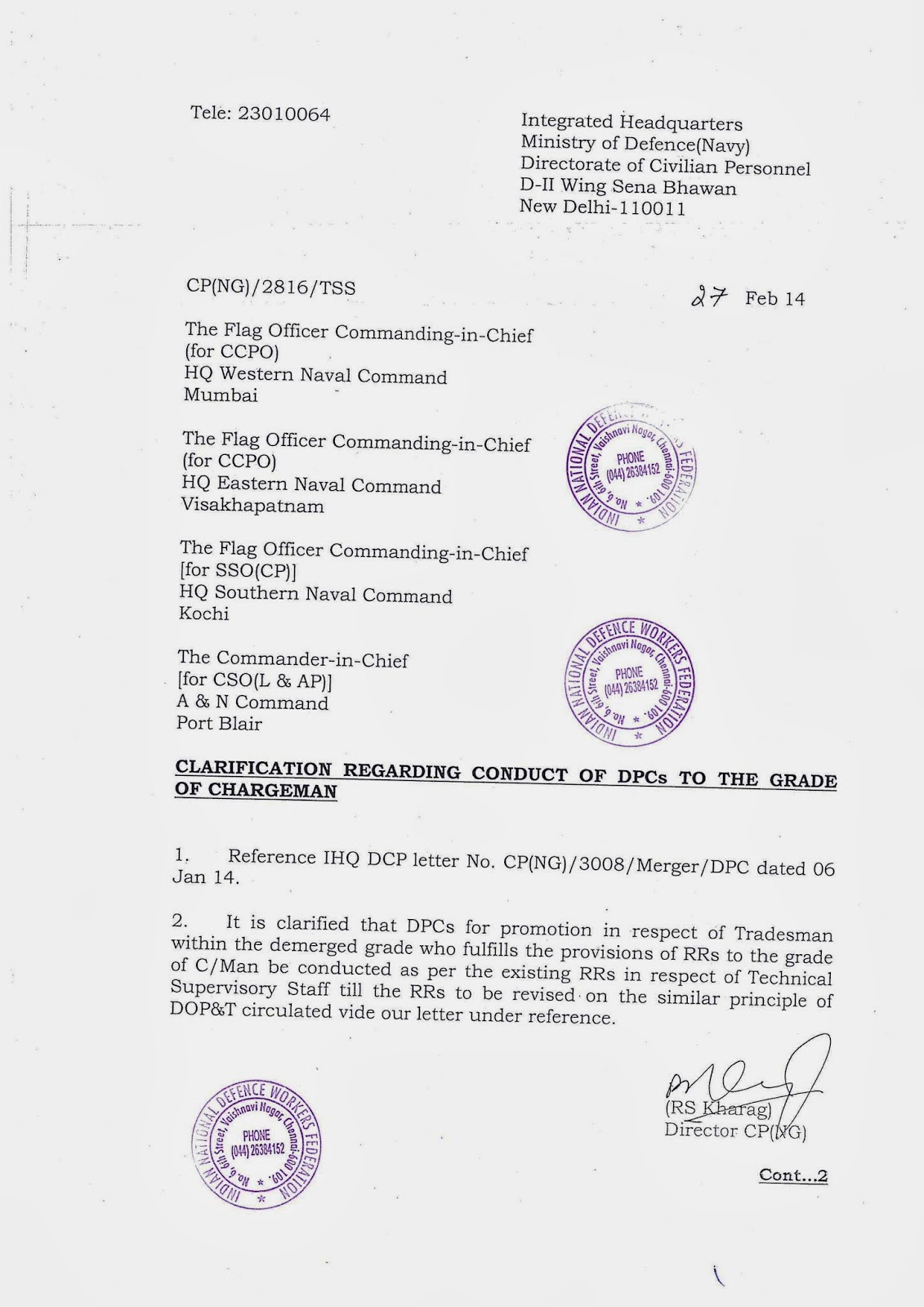 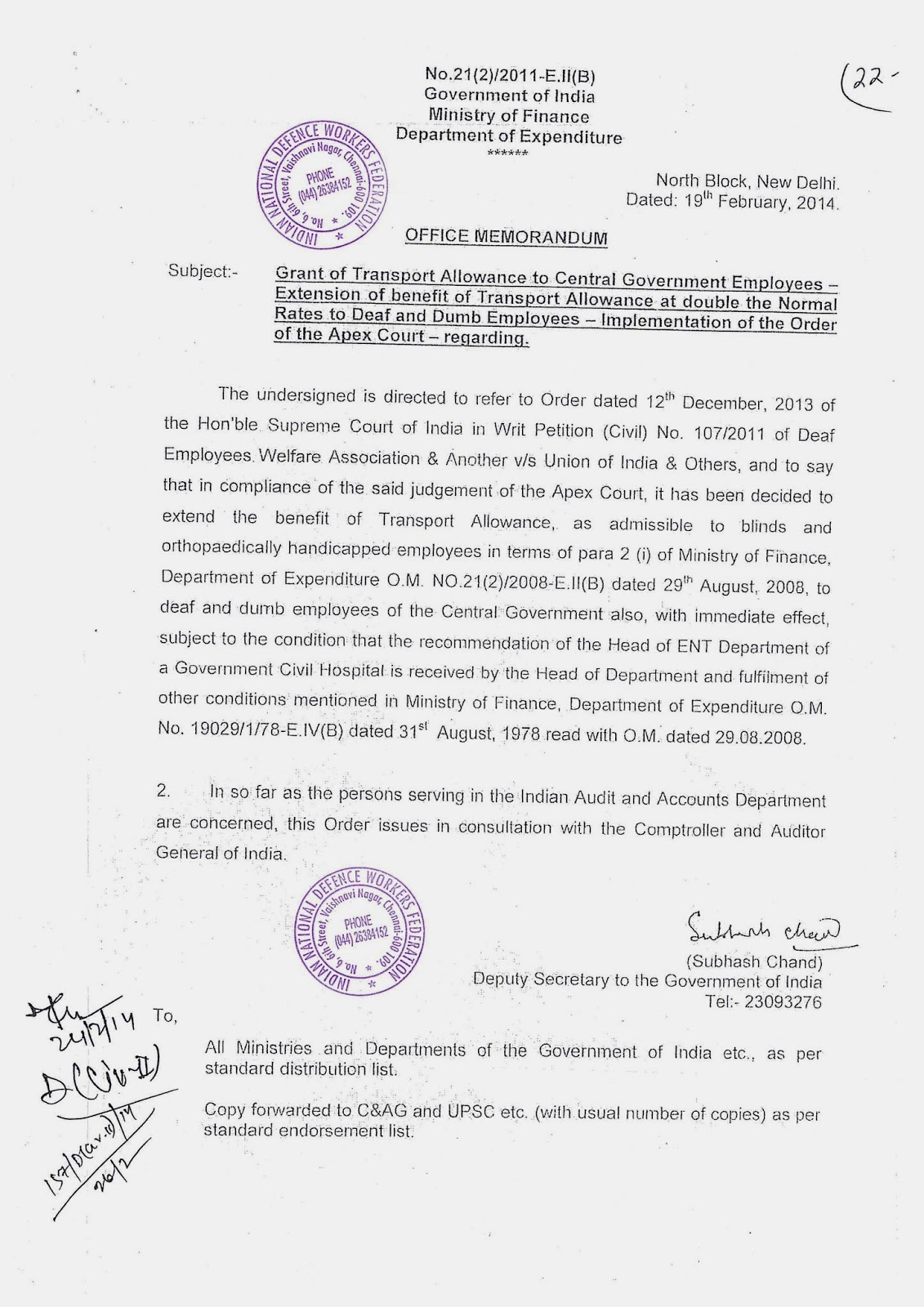 14.      CADRE REVIEW
Cadre Review proposal for Para-Medical staff was forwarded by OFB to Ministry of Defence.
15.      Revised Pay slip was issued.  We have demanded that the Bank Account number to be included.
16..   One time relaxation from Labourers.  The issue was referred to DOP&T to grant MACP Rs.2800/-.
17.      For granting ACP in promotional Hierarchy to Durwans, it was demanded to merge Durwans with Subedar Durwan.  This would be considered.
18.      RELIEVING STAGNATION TO STOREKEEPING STAFF
A proposal given by the Staff side JCM to Divert the Direct Recruitment, LDCE vacancies of Chargeman (T) and Chargeman (NT) one time to relieve the stagnation of Storekeeper and Supervisor stores is being considered about the feasibilities.  Now the DR and LDCE vacancies for this year have already been released but it would be considered in the next year.
19. Leather Machinist will be considered for promotion to Chargeman (Leather) based on the recommendation of the Sub-committee report.


20.  Due to court cases, Cadre Re-structuring was delayed and the promotions were granted at a later date.  It is demanded that all financial benefits should be granted retrospectively instead of notionally.
Yours Sincerely,
sd/-
(R.SRINIVASAN)
General Secretary
Posted by INDWF at 7:46 PM No comments:

10.      OF DAY GIFTS
It was demanded to Chairman that during OF Day celebrations on 18th March of every Year the employees should be given gift and at the same time there should be uniformity in the Factories would be decided by OF Board.
11.      CENTRAL RECRUITMENT BOARD FOR OFB
OFB proposed long back to form a OFB Recruitment Board for recruitment of Group ‘C’ posts.  Still the appointment of the Board has not been approved by Secretary, DDP. Since more number of posts are lying unfilled by recruitment by many factories and GMs are reluctant to carry out the process of recruitment.  5 Factories have been identified and will be entrusted the responsibilities of Direct Recruitment for various Group ‘C’ posts.  The vacancies factory wise will be notified through advertisement and written test will be conducted on one day in various centres throughout the country and selected candidates list will be sent to the nearest factories of the candidates which will avoid migration from one place to another.
12.      VIJAYANTA SR.SECONDARY SCHOOL OF HVF
HVF Vijayanta Sr. Secondary School requires major repairs and renovation including providing better amenities.  Member/Per assured he will visit and sanction necessary funds. Provided the factory submit the proposal. Member A/V also agreed and supported the claim of INDWF.
13.      VII CPC CELL FORMATION AT OFB


At OFB, Cell was formed to prepare a proposal to the 7th CPC.  A meeting was convened on 26.2.2014 at OFB with all the Federation and Association representatives a report has been asked to submit to the OFB.
Posted by INDWF at 7:44 PM No comments:

7.     HAPP – Work Load
Within the powers of OF Board, Rs.50 Crores have been sanctioned for the RGB 6 & 12 project considering the huge requirements.  It is temporarily suspended but it will be restored soon.  FSAPB – Mark III, PMT etc huge requirements are there and HAPP will have more work load.
8.  JWM Transfers
Against 600 applications seeking transfers, in one sitting about 100 applications were cleared.  The remaining will be cleared on stages by Member/Per with the assistance of NG Section Officers very soon.  Further the pending transfer order which were cancelled will be restored.
9.    ONE TIME RELAXATION TO UDC & OS AND CADRE REVIEW
The issue was already taken up with DOP&T for obtaining One time relaxation.  Further, Cadre Review proposals for clerical Cadre has been referred to M of D with the following proposals vide OFB letter Dt 13.02.2014 to DPP

4.  INCENTIVE For EXAMINERS
Indian National Defence Workers Federation raised this point granting of Incentive for Examiners which is pending for long.  Production employees are getting Piece work, Maintenance Employees are getting Incentive but whereas the Examiners are not getting any financial benefit.
Chairman said that the Council of Quality General of India in its meeting to consider the proposal for granting incentive.  Necessary policy is to be framed and will be taken up with Secretary, Department of Defence Production who is also in favour of considering.
5.CONSIDERING DIPLOMA OBTAINED THROUGH DISTANCE EDUCATION FOR LDCE TO CHARGEMAN
Indian National Defence Workers Federation insisted that the Diploma obtained through Distance Education needs to be considered as the employees cannot acquire qualification through full time Diploma.  Also employees working in remote areas do not have any facility near to them.  Further acquiring Diploma/Degree is only eligibility, and not they will be automatically selected unless they pass the written examination and qualify for the same.  Therefore, the Diploma/Degree obtained through distance education should be considered eligible for appearing to Chargeman post through LDCE Quota both for Tech and Non-Tech.
Chairman while replying said that on this distance education we need to take a longer view and settle the matter at the earliest.


6..  On IR matters when raised by INDWF about HE Factory violating safety norms etc harassing workers, extending probation periods etc.  Chairman, OFB said instructions will be issued to GM’s to avoid any gap between Unions and administration to maintain harmonious Industrial Relations.  On HE Factory issue a feed back was asked to submit on building No.37 where safety norms are totally violated.
Posted by INDWF at 7:42 PM No comments:

DECISIONS OF JCM III OF OFB AT KOLKATTA

IMPORTANT ISSUES DISCUSSED AND ITS OUTCOME IN THE JCM III LEVEL MEETING OF OFB HELD ON 24.02.2014 AND 25.02.2014 AT KOLKATTA
DECISIONS
1.     PIECE WORK CO-RELATION ON VI CPC PAY BAND & GRADE PAY
After discussions held on 06.02.2014 at M of D, the proposal to grant Piece work Profit on Rs.5200 PB-I and Grade Pay Rs.1900 total Rs.7100/- as minimum of pay + Increment separately paid.  After approval by Defence Minister, it was sent to OF Board for getting Draft Government Letter (DGL) and the same was prepared and sent to Secretary, Department of Defence Production for issue of Government letter.  Orders will be issued in the first week of March 2014.  M of D said that the Co-relation will be effective from prospectively.  But it was demanded retrospectively which will be considered separately.
2.  GRANTING OF DEPARTMENTAL OVERTIME FOR 3 ¼ Hours (Saturdays) for PIECE WORKERS.
Departmental OTA for Piece workers for 3 ¼ Hrs working on Saturdays was stopped by OFB w.e.f 01.04.2006 whereas the same is being paid to Day workers, Maintenance Workers as well as Non-Industrial Employees.  This issue was discussed with M of D and at OFB.  The file was now submitted to OFB seeking justification.  The proposal from OFB with proper justification is about to be sent to M of D and Defence Finance for payment of OTA on Single Rate to Piece Workers for working on Saturday 3 ¼ Hrs.
3.                MANPOWER
For 2013-14 issue of sanction for Manpower was delayed but sanction was issued.

For 2014-15, after collecting the data about the requirements from the factories, proposal will be taken up with Secretary, DP and necessary sanction will be issued.